I've blogged here before about the Jefferson Bible, and of course I dealt with it extensively in my book, Closing the Circle. My earlier blog on the Jefferson Bible referred to a specific edition of it, that edited by Forrest Church which I think is more or less the standard at this moment. 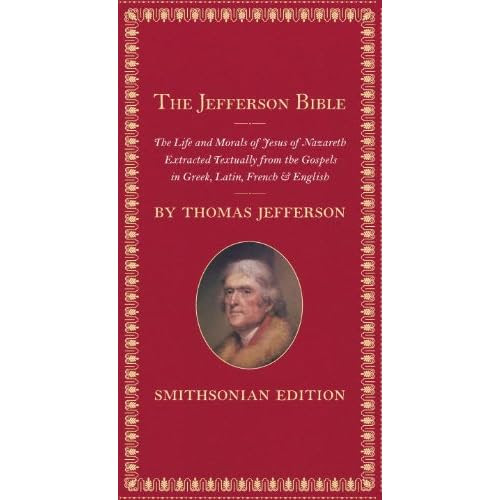 Now, however, the Smithsonian is publishing a facsimile edition of Jefferson's original, which will be quite interesting to see.

At the same time, it makes me wonder if it was this re-publication of the original which actually might have been alluded to in Gary Renard's narrative in The Disappearance of the Universe, on pages 218-219. That was written and published at a time when the Jefferson Bible one one edition or another had been continuously available, and yet it refers to its not being available with the following somewhat befuddling statement: "Of course he [Jefferson] couldn't make it available to the public at that time without being accused of terrible things, but it will be made available soon for those who want to see it."

It is particularly the phrase "want to see it" which intrigues me - because again the text has been continuously available, but seeing a facsimile of Jefferson's actual, manual product is something else altogether. The reason I have any inkling is because in the Forrest Church edition of the "Jefferson Bible" there are three facsimile pages from the original, and you can't help but visualize Jefferson at his desk, communing with Jesus as best he understood him, and with scissors and glue pasting together, guided by intuition and common sense, that which he considered to be authentic and lopping off all the circumstantial stuff which he considered ballast. It is a completely fascinating image.

The image is all the more intriguing because it is a prototype of the process we all go through at some point in time if we turn inside and try to understand what it is Jesus teaches, and make at least a start with developing our own relationship with him. In the process we have to liberate him out of the dustbin of history, and forgive him, as he alludes to in several places in the Course, for not being the idol that we have made of him. To the ego, Jesus is terribly offensive, which is an entirely reasonable position, because Jesus pulls the rug out from under the ego thought system. Hence it is necessary, if we want to turn to him with an open mind, to first forgive him for not being any of the things we are prejudiced to think he is.


I am made welcome in the state of grace, which means you have at last forgiven me. For I became the symbol of your sin, and so I had to die instead of you. To the ego sin means death, and so atonement is achieved through murder. Salvation is looked upon as a way by which the Son of God was killed instead of you. Yet would I offer you my body, you whom I love, knowing its littleness? Or would I teach that bodies cannot keep us apart? Mine was of no greater value than yours; no better means for communication of salvation, but not its Source. No one can die for anyone, and death does not atone for sin. But you can live to show it is not real. The body does appear to be the symbol of sin while you believe that it can get you what you want. While you believe that it can give you pleasure, you will also believe that it can bring you pain. To think you could be satisfied and happy with so little is to hurt yourself, and to limit the happiness that you would have calls upon pain to fill your meager store and make your life complete. This is completion as the ego sees it. For guilt creeps in where happiness has been removed, and substitutes for it. Communion is another kind of completion, which goes beyond guilt, because it goes beyond the body. (ACIM:T-19.IV.A.17)


Is he the Christ? O yes, along with you. His little life on earth was not enough to teach the mighty lesson that he learned for all of you. He will remain with you to lead you from the hell you made to God. And when you join your will with his, your sight will be his vision, for the eyes of Christ are shared. Walking with him is just as natural as walking with a brother whom you knew since you were born, for such indeed he is. Some bitter idols have been made of him who would be only brother to the world. Forgive him your illusions, and behold how dear a brother he would be to you. For he will set your mind at rest at last and carry it with you unto your God. (ACIM:T-5.5)

In Jefferson's day of course this whole issue was somewhat more acute than it is even today and Jefferson for that reason avoided publishing his effort. That only happened posthumously, but in his private correspondence he minced no words. Now, almost 200 years after Jefferson produced this gem, we are in a much better position. We now have the Thomas Gospel, which re-established the primacy of original Jesus sayings over the embellishments of Christianity, and not only that, we now have A Course in Miracles, and the DU tradition to close the circle, if the reader will pardon my pun.
Posted by RogierFvV at 1:15 PM No comments: Links to this post